You grant your consent to all cookies by clicking on the “Accept all” button.

About us > International projects > Moldova

From March 2014, the company VODNÍ ZDROJE, a.s. has been carrying out a Czech Republic development cooperation project entitled “Research on the quality and quantity of drinking water resources in southern Moldova”. The goal of this project is to help local authorities responsible for the monitoring of drinking water quality obtain relevant data in order to be able to take relevant steps towards ensuring safe drinking water for all inhabitants of the southern regions of Moldova.

The project focuses mainly on obtaining data on public drinking water resources in southern Moldova, which means surveying all public wells, drilled wells and springs that are used to supply the population with drinking water. Sampling is made from the most important or potentially contaminated sources for basic chemical and microbiological analysis; in case of sources suspected for contamination by petroleum products, pesticides or heavy metals, specialised analyses are made in addition. “In Moldova, contamination of groundwater by agrochemical products, especially pesticides, is a big problem, as they have often been stored in a very inadequate way and without the necessary security precautions. Especially due to intensive fertilisation, groundwater is polluted by high concentrations of nitrates, many times exceeding the drinking water regulatory limits,” says the researcher responsible for the project implementation, Mgr. Ivo Černý.

Each monitored public source of drinking water is recorded in a database that will be used to create a general water resources map including all potential as well as confirmed sources of contamination. This GIS water resources database will be handed over to relevant Moldovan institutions. In addition to that, all mapped water resources will be marked with information signs and the town mayors will be given detailed reports on the drinking water situation in their area. 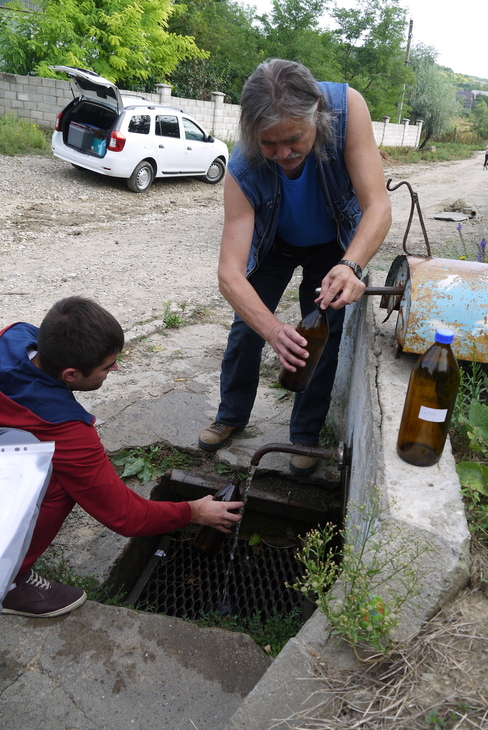 The supply of drinking water for the people of Moldova is still a major problem. Only 17% of the rural population have access to drinking water from a centralised system. More than two thirds of these systems are in poor condition and fail to meet the sanitary standards. As a result, people are forced to consume poor quality drinking water.

In rural areas, the most important sources of drinking water are shallow wells. There are more than 132,000 of them across the country, the total daily consumption of water from these wells amounting to approx. 50,000 m3. Springs are other, albeit much less numerous sources of water.

Most of the groundwater sources fail to meet the drinking water quality standards and requirements. This particularly applies to the southern part of the country where high concentrations of harmful chemical substances are found (fluorides, iron, hydrogen sulphide, chlorides, sulphates), due to especially high values of naturally occurring heavy metals (Cu, Zn) as well as anthropogenic contamination (Cr, Ni, Cd, Pb) and excessive salinity originating from poor carbonate soils and underlying saline clays. The water from wells and springs is typically highly mineralised, hard and contaminated by nitrates, thus having a direct impact on the health of the population. Organic pollution is often caused by wrong placement and maintenance of the wells.

Decentralised and open water sources are contaminated particularly by toxic substances, persistent organic pollutants, and petroleum products. Significant sources of contamination are also uncontrolled dumping sites for livestock manure with the resulting high concentrations of ammonia and biogenic elements leaching into the shallow wells and springs during torrential rains. Due to the predominant occurrence of shallow large wells – frequently placed in a wrong location – and the prevailing occurrence of coarse-grained soils overlying the sedimentary horizons (limestone, sandstone), the aquifers are highly vulnerable to contamination. 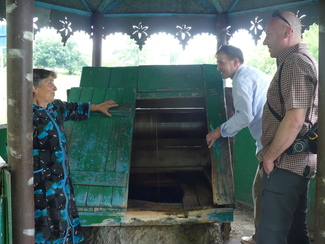 On the central and regional levels, these wells are not given proper attention and the quality of water is not monitored. Bacteriological pollution should be regularly checked by local offices of preventive medicine – SANEPID. In practice, however, this often does not take place due to the lack of funds, lacking equipment and staff qualification. There are no regulations to protect the environment in the vicinity of the wells and aquifers, or regulations for performing hygienic and epidemiologic control. So far, there are no data available for creating long-term plans for the construction of public water supply systems and for setting priorities for different regions. There is no qualitative and quantitative methodology or practice of water sampling from these sources, or any data on the impacts of sampling on the limited groundwater resources, which, in addition, are strained by a significant and uncontrolled exploitation of water from deep wells.

An important socio-economic issue is the fact that the required transition towards modern methods of drinking water supply is compromised by the reluctance of the consumers to pay for it. The construction of a water supply system is always very costly and such long-term investment cannot be made without charging fees for water supply services. Progressive solution of this problem is one of the priorities of the national interests and strategies of Moldova. 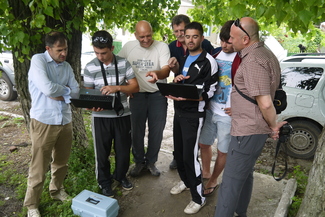 From the perspective of Moldova, it is highly desirable that reliable studies be carried out in the near future in order to thoroughly assess the qualitative and quantitative characteristics of the wells and springs in the southern region of Moldova. From a methodologic point of view, it is advisable to launch a pilot project in the southern part of the republic where wells and springs constitute the main source of drinking water for the population and where qualitative and quantitative research is most needed.

According to the data of the Centre of Public Health of the Ministry of Health, people from this region suffer most from various diseases related to the quality of consumed water. 20-25% of cases of acute diarrhoea and hepatitis and 25-30% of non-communicable somatic diseases are caused by unwholesome water. In the southern part of the republic, endemic diseases caused by poor drinking water quality are widespread. Among the most frequent are dental pathologies (fluorosis, caries), endocrine disorders (endemic goitre), osteoarticular disorders (endemic skeletal fluorosis), genitourinary disorders (urolithiasis), etc.

It is a priority for Moldova to solve these problems using the experience of Czech experts for the investigation, comprehensive study, mapping, and inventory, focusing on hygienic and ecological conditions of the decentralised shallow water resources as well as the remediation proposals to ensure their further use for the supply of drinking water that would meet the required quality standards.

The project will last till the end of June 2016.